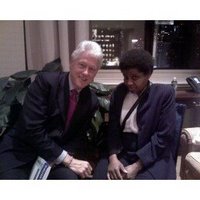 Late last week I had the opportunity to catch up with one of my favorite — and most influential — professors from Trenton State College (which is now named The College of New Jersey, but will forever be known to me as TSC). Her name is Kim Pearson (follow her on Twitter here).

As an undergrad, I took Kim’s classes every chance I had. And, while I’m sure her classes were built on some level of formal curriculum, I never noticed it. How many professors turn their Professional Writing classes into full-scale PR agencies that help local non-profits? Yup, that’s what I thought.

That’s one of the reasons I was excited when she reached out to me on Facebook to talk about a project she’s been working on. Funded by a $600,000 grant from the National Science Foundation‘s Broadening Participation in Computing Program, Kim and her colleagues are developing a pilot program intended to increase the participation of members of underrepresented groups in the computing sciences by exposing middle school-aged students to interactive journalism. The program is called the Interactive Journalism Institute for Middle Schoolers, a partnership between faculty and students of TCNJ and Fisher Middle School in Ewing, NJ.

This is an important program (so much so, that I recorded a video for Kim that she put on the site). Let me repeat: This is an important program. The lines between computing and writing (to really boil the disciplines down to their basics) are no longer blurring…they’ve blurred. Reporters at institutions such as The New York Times are now adding cameras and microphones to their standard-issue pens and pads. Software developers are now as cognizant of how their tech will be used as they are of the ones and zeros that make the products work. Teaching children early — before they hit high school and college, where it is too late in the learning process — is critical.

We hear often about the need for America to re-focus on teaching science and math. The Interactive Journalism Institute for Middle Schoolers does just that…and more.

One reply on “Going F.I.S.H.’ing at My Alma Mater”